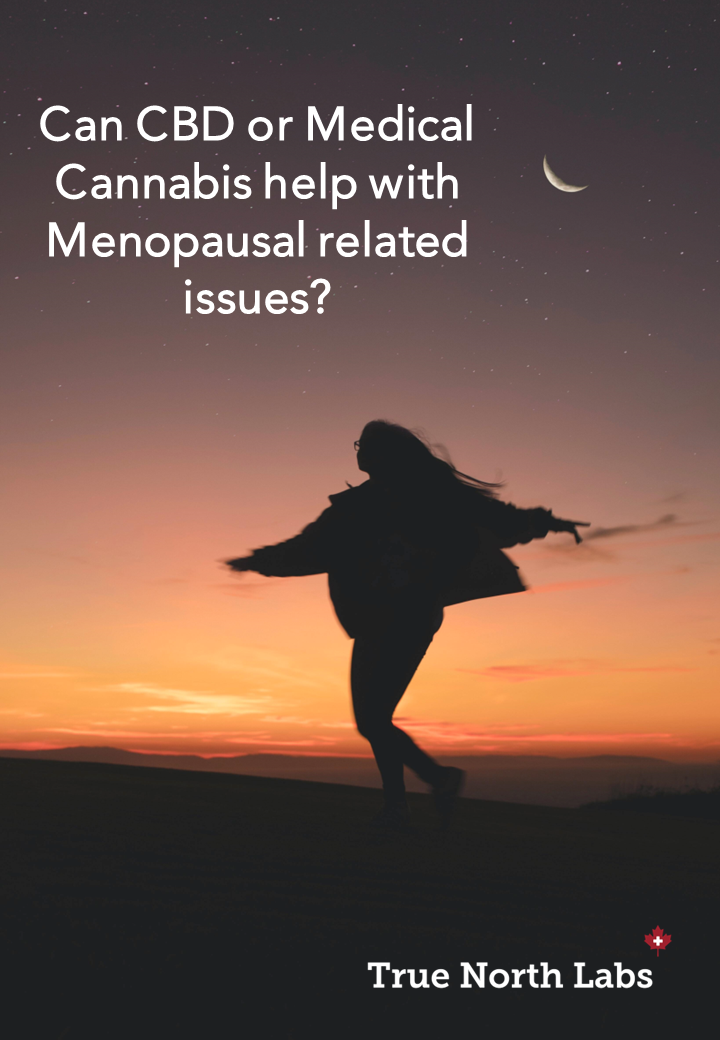 According to the British Menopause Society, 75% of women are affected by menopausal symptoms – an estimated 1.1 billion worldwide. Until recently, hormone replacement therapy (HRT) was the go-to treatment for menopause, however studies in recent years have shown a steep decline in its use (46% in the USA, 28% in Canada, and similar data were observed in European countries such as Germany or the United Kingdom), due to some concerns over its safety. This has left a reported 73% of women going without treatment for what many describe as one of the most challenging times of their life, but that’s not to say they don’t want treatment options (78%) of women surveyed by Female Founders Fund in 2020 said menopause had interfered with their lives), it’s just that, as far as they know, there aren’t many options available.

However, this is changing. As more and more people turn to naturopathic, holistic therapies to manage their health and wellbeing, cannabis products have caught the attention of women looking for alternative solutions for menopausal respite. Rightly so, as cannabinoids (both major and minor) are now being found to offer a broad range of potential benefits through which some of the most common menopause symptoms might be relieved.

The menopause market is now believed to be worth a staggering $600 billion, but Forbes reported that only 5% of women’s health start-ups were focused on menopause. This is great news for wellness businesses who are looking for new, untapped areas to home in on. But to succeed in the menopause market, it’s vital to understand what the menopause is, what the symptoms actually are, how they affect women, and of course, which cannabinoids and terpenes are the breakthrough stars.

What is the menopause?

Menopause occurs 12 months after a woman’s last period, however, perimenopause (the time in which the body is transitioning into menopause) can occur years before this time, and often comes with its own challenging symptoms. The average age for a woman to enter menopause in the US is 51, however, everyone is different.

Menopause comes as a result of naturally declining reproductive hormones, namely estrogen and progesterone, signalling the end of a woman’s ability to have children. This is of course a huge change in the body and can come with a raft of symptoms, some of which can be quite debilitating, hence the need for treatment options.

What are the symptoms of menopause?

The most commonly discussed symptoms of menopause include hot flashes, mood swings and vaginal dryness. However, there’s much more to it than that! According to a new study, 1 in 10 women experience suicidal thoughts as a result of perimenopause and menopause. They also face increased cardiovascular risk, hair loss, pain during sex, brain fog, burning tongue formication (the feeling of insects crawling on the skin) and tinnitus, to name a few.

The short answer is, yes! And many women already use it.

A brand-new study, published in the Journal of The North American Menopause Society surveyed 250 menopausal participants and discovered that a staggering 86.1% use cannabis, with 78.7% saying they endorse cannabis use to treat menopause symptoms.

But, as those familiar with the incredible complexity of cannabis will know, to get the best possible therapeutic potential out of the plant it’s key to understand which cannabinoids and terpenes work best for which ailments. With the knowledge, it’s possible to develop vastly superior, cannabinoid-based, targeted solutions that really excel.

Is CBD oil good for Menopause?

The CBD molecule is an extremely valuable tool when treating the menopause thanks to interaction(s) with the endocannabinoid system – our full body regulator. CBD offers fantastic support, encouraging increased synthesis and release of endocannabinoids in the body to help rebalance imbalances that occur during menopause. Evidence suggests that endocannabinoids are vital for mood regulation, and there are also studies to indicate that with menopause and plummeting estrogen levels comes endocannabinoid deficiencies – so taking CBD to give these neurotransmitters a boost could make a world of difference.

Is THC good for menopause?

THC can actually stand in for endocannabinoid Anandamide, which not only helps keep mood and the fight or flight response in check, but it also helps regulate body temperature – great news for anyone suffering from hot flashes! However, as is so common with cannabinoid therapy, these thermoregulating effects of THC are very dose dependent and low doses can actually raise temperature. So, while there’s a lot of potential here for menopause products, it’s important to get the levels right.

Is CBDa good for menopause?

As well as lower levels of estrogen and progesterone, serotonin levels dive when a woman goes through menopause, which is now thought to play a huge role in menopausal symptoms.

Although CBDa doesn’t interact with the ECS, it does have remarkable activation potential on serotonin receptors. In fact, one study found cannabidiolic acid (found in raw cannabis material) to be 1000 times more potent in binding to a specific serotonin receptor linked to anti-nausea and anti-anxiety than CBD!

It’s believed that this drop in serotonin contributes to increased irritability, anxiety and sadness in menopausal women, as well as hot flashes, and insomnia. So, if you’re creating a product to target these issues, it’s definitely worth considering featuring CBDa.

There are of course 140 cannabinoids to think about, as well as terpenes and flavonoids. Bone loss as a result of drastically lowered estrogen levels might be helped by CBC, CBG and THCV, with one study reporting that these cannabinoids hold the ability to “stimulate bone growth and may be able to prevent osteoporosis after menopause”, making these great potential additions to a multi vit style formulation.

This is only the tip of the iceberg when it comes to creating specific cannabinoid formulations to target the wide-open menopause market. If you’d like to know more about how you could develop your own, focused, cannabinoid solutions, get in touch!

Remember, Cannabis is not all about getting high, it’s about getting better, and our mission is to create solutions that empower better health.

For a recent study on medical Cannabis and Menopause which we mentioned and linked above, please see, A survey of medical cannabis use during perimenopause and post-menopause, by Dahlgren, M. Kathryn PhD , et al