Harnessing the potential of terpenes in a bespoke CBD oil blend (or other product) can completely transform a formulation. 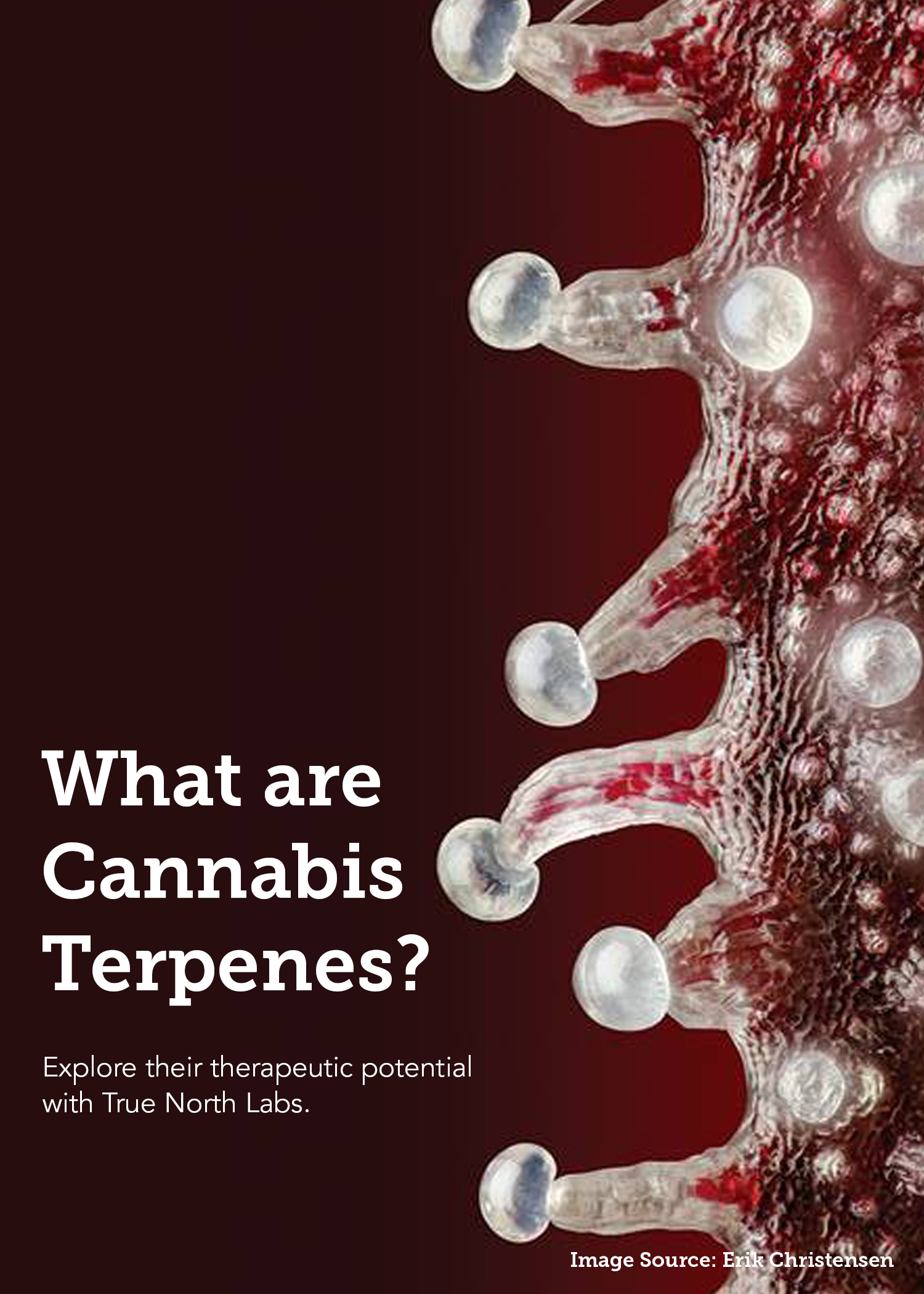 If you’re interested in cannabis, in any capacity, you’ll almost certainly have heard of terpenes. But despite the integral role these aromatic compounds play in the therapeutic potential of the cannabis plant, and the vast amount of studies and historical use to back up their purported physiological and psychological effects, terpenes are often not given the attention they deserve.

Here at True North Labs, we’ve spent the last 10 years not only delivering exceptional quality cannabinoid products to the world but deepening our understanding of all facets of the cannabis plant. This enables us to stay ahead of the curve and create formulations that really work. Through our research and development, we have come to understand the importance of terpenes and the vital role they play in health and wellbeing.

Terpenes are aromatic compounds found in almost every plant in nature – not just cannabis. There are over 30,000 of them and It’s usually a blend of terpenes that creates the scent of natural products, such as flowers, leaves, trees, fruits, and spices. They’re used in perfumes, cleaning products, food, drink, and are the major constituent of essential oils from plants. They fill the air on woodland walks and waft around your kitchen when you reach for herbs and spices to add to your cooking.

We often (not always) take pleasure from the scent of terpenes. Many terpenes smell and taste wonderful – pinene is what gives pine trees their fresh aroma, limonene can be thanked for the zesty scent of a lemon, for example. But as well as attracting (humans, animals and pollinators, such as bees and butterflies) they can also repel, protecting the plants they originate from against predators, pests and pathogens. They do all of this via a raft of anti-fungal, anti-viral, anti-septic, anti-microbial, anti-parasitic and anti-biotic properties that, as luck would have it, appear to extend beyond the plant kingdom, benefitting humans in similar ways.

Even without the scientific evidence we have now, the effects of terpenes can be so noticeable that they have been used to treat a vast ranges of ailments for millennia. Many terpenes were (and are) used widely in natural folk medicine, one being curcumin (produced by Turmeric) which holds anti-inflammatory, antioxidant, anticancer, antiseptic, antiplasmodial, astringent, digestive, diuretic, and many other properties.

Terpenes (or terps as they’re often called in the cannabis world) have and will always play a vital role in all of our lives, in medicine, in cookery, in our experience of the world. Cannabis is one of the densest sources of terpenes on Earth, often boasting over 150 of them in a single flower bud, which is why it has such a strong smell. As you might imagine, this large sum of terpenes plays a key role in the therapeutic value of the plant, as well as the aromatics and taste.

Although there are over 150 cannabis terpenes, most of them are in very small amounts. But, there’s a selection that stand out. These vary widely between cannabis cultivars (strains) and can make the effect the plant has very different from one type to the next. A lot of attention has been placed on cannabinoids doing most of the work in how cannabis can alter your entire state of being, but terpenes are just as powerful. One common cannabis terpene, Caryophellene, has been dubbed a ‘dietary cannabinoid’ as this one in particular activates the endocannabinoid system just like a cannabinoid could.

Due to the strong effect cannabis terpenes can have on physical and mental wellbeing, it’s possible to choose a cannabis strain – or create a full spectrum or terpene infused CBD oil – that’s best suited to different needs. Myrcene can be added to aid with sleep, Terpinolene has been shown to help with heart health, and Linalool has the potential to work wonders on reducing anxiety. Because of this, we’re going to introduce you to a series of prominent terpenes in cannabis and their properties in a blog series – so check back!

Harnessing the potential of terpenes in a bespoke CBD oil blend can completely transform a formulation. Want to know more? Get in touch by clicking here!