What is CBG? - True North Labs explores the mother cannabinoid.

​While CBD and THC have both had plenty of time in the spotlight, a lesser-known cannabinoid, CBG, is capturing interest from consumers and scientists. 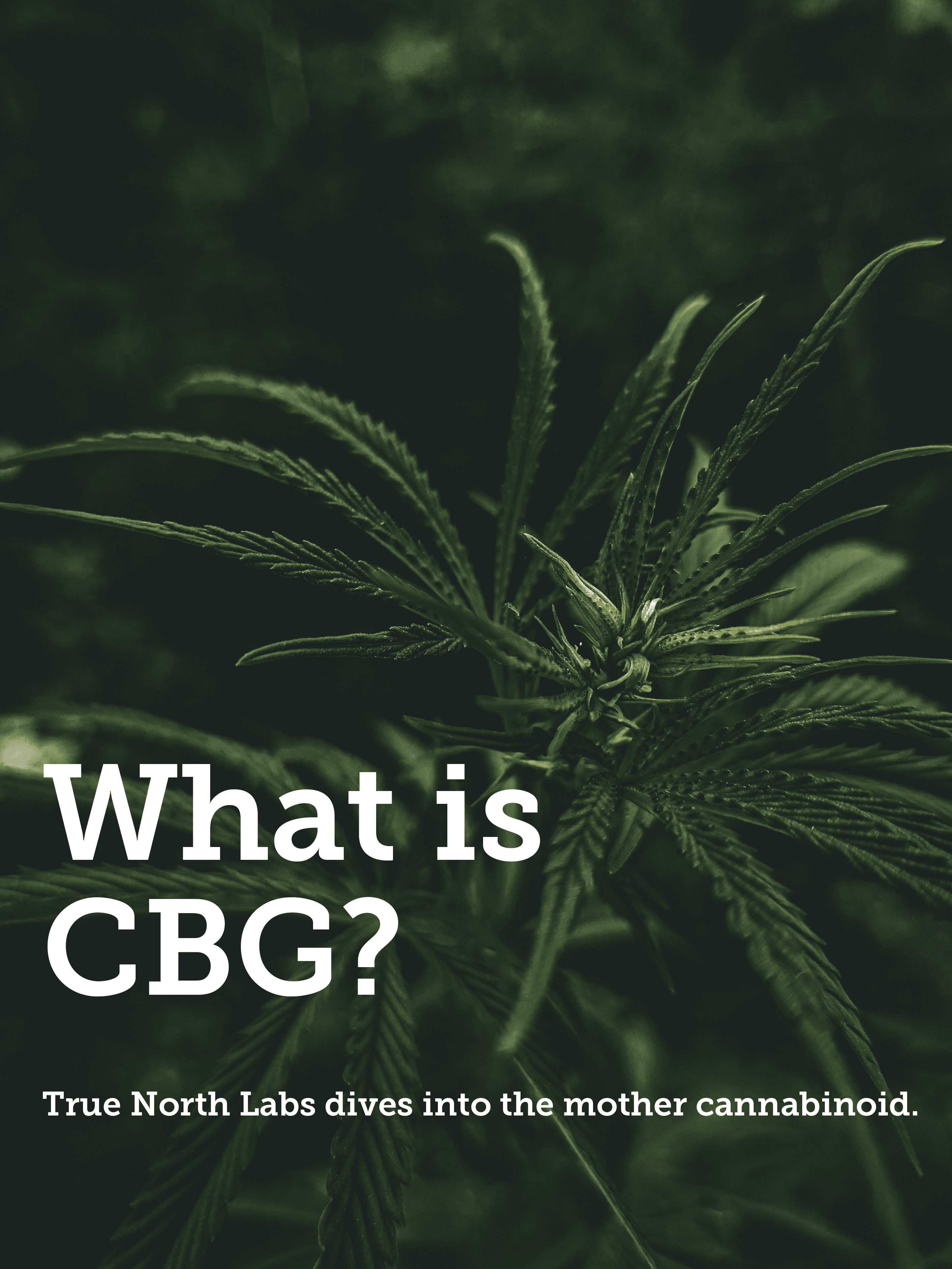 IN THE BEGINNING, THERE IS CBG.

CBD and THC are two of the most well-known cannabinoids. CBD is known for its calming, therapeutic effects, while THC is famous for its psychoactive effects that cause feelings of euphoria and sometimes confusion.

THC and CBD are the predominant cannabinoids found in Cannabis and are produced from a common precursor, Olivetolic acid. In fact, Cannabis has been bred to overexpress these two chemicals.

While CBD and THC have both had plenty of time in the spotlight, lesser-known cannabinoids, such as CBG, are capturing interest from consumers and scientists alike.

Cannabigerol (CBG) is a cannabinoid obtained from the cannabis plant. It's often referred to as the mother of all cannabinoids. This is because other cannabinoids are derived from cannabigerolic acid (CBGA), an acidic form of CBG.

Throughout the plant's growth and with the aid of natural enzymes, CBGa will naturally and slowly transform itself into other acidic cannabinoids, such as cannabidiolic acid (CBDa) and tetrahydrocannabinolic acid (THCa). These are the acid cannabinoids, which later transform into the well-known CBD, THC, and CBG.

So it goes like this, CBGa is the first cannabinoid to form in the trichomes of a hemp or cannabis plant. Enzymes will then break CBGa down into cannabinoids as the plant matures.

HOW DOES CBG WORK, AND WHAT IS CBG GOOD FOR?

The body's endocannabinoid system processes CBG. The endocannabinoid system or the ECS comprises a vast network of chemical signals and cellular receptors densely packed throughout our brains and bodies. A great analogy is that they act as traffic cops to control the levels and activity of most of the other neurotransmitters. They keep our bodies in an optimal state.

CBG, a phytocannabinoid, imitates endocannabinoids in our bodies, which are the natural compounds our body makes.

Our body contains two types of cannabinoid receptors—CB1 and CB2. CB1 is highly expressed in the brain and nervous system, while CB2 is primarily expressed in cells of the immune system.

CBG works by binding itself to the active site of CB1 Receptors and blocks signals that could be detrimental to your body's homeostasis. A reminder, homeostasis is any automated process by which an organism maintains stability.    CBG is also thought to strengthen the function of anandamide (fatty acid neurotransmitter), which enhances pleasure and motivation, regulates appetite and sleep, and alleviates pain. Unlike THC, CBG has no psychotropic effects, so it will not give you a high.

Initial research has shown that CBG may have similar characteristics to CBD, but they act very differently. These cannabinoids are non-psychoactive, offering antioxidants, anti-inflammatory, neuroprotective, and analgesic properties. You can find further research at the end of this post.

ARE CBG STRAINS LEGAL TO EXTRACT?

Europe has a long-cultivated history with hemp for various commonly known industrial uses, such as animal feed, textile fiber, hemp seed, protein, and different building materials. The European Parliament, late last year, raised the requisite THC percentage in the plant material from 0.2 to 0.3 percent, bringing it in line with the USA. (This proposal has long been advocated by the European Industrial Hemp Association (EIHA), of which we are a member). The Common Agricultural Policy (CAP) proposal was adopted recently by the European Parliament and will enter into force on January 1st, 2023. Until then, firms extracting CBG from hemp varieties is legal as long as the THC level is below 0.2%.   In Switzerland, where we are based, we work with GACP Swiss biomass that allows up to 1% THC levels in the biomass.

For example, let's look at how CBG and CBD interact with the 5-HT1A serotonin receptor. CBG acts as an antagonist, while CBD is an agonist. CBG naturally reduces concentration as the hemp plant matures, while CBD does the opposite and increases. Both cannabinoids have similar applications for health issues because they reduce pain sensations in the brain. However, CBG is more effective than CBD for treating migraines and easing muscle pain. Regarding the difference between these two cannabinoids, even though there is insufficient information to determine which is more effective, CBG still shows potential in treating conditions like cancer and irritable bowel syndrome. There's also evidence that it can help treat migraines, hypertension, glaucoma, and other issues.

If you want to learn more about the ECS and cannabis-related medical education, we would highly recommend looking at the program by the late Rob Dhobe from HavasECS. A preview can be found here: Endocannabinoid Courses (cannabissciencetech.com)

CBG is one of the considerable cannabinoids found in most Cannabis varieties. It has shown relevant antibiotic effects. Like CBD, it has analgesic (acting to relieve pain) and anti-inflammatory properties, indicating scope for developing cannabinoid products that help pain and inflammation.

The way CBG interacts with our endocannabinoid system is different from CBD. CBG binds directly to both CB1 and CB2 receptors and might be more efficient at delivering its benefits into our systems.

As CBG grows in popularity, we can expect more research and studies to be conducted. Nevertheless, initial studies indicate that the compound can help manage the symptoms of various conditions; At the end of this post are some interesting papers and articles we have seen over the years.

WHAT ARE THE KEYS TO UNLOCKING CANNABINOIDS WHEN LOOKING FOR PRODUCT DEVELOPMENT?

Starting with high-quality material is the key/most crucial step of the process. Without this, all functions down the line are compromised.

We suggest you look to work with growers to minimize the environmental impact and only those who maintain the highest standards. Soil tests, ecological impact, and pesticide-free growing programs are critical to selection. Try to select phenotypes based on cannabinoid content and terpene profile and carefully monitor and analyse the environmental, moisture, and storage conditions. An extractor's raw materials should always undergo a rigorous qualification process that includes multiple analyses for heavy metals, pesticides, and micro-bio. Other factors will also affect your success rate, but we recommend you engage and arrange services from a qualified lab.

Ten years of extraction experience in the North American markets have taught us that in-line cryogenic ethanol extraction yields the best results. Separating the cannabinoids from the plant material, leaving behind undesirables like chlorophylls, lipids, and fats followed by cold filtration yields a 'crude oil' of the highest quality.

In-line filtration is a critical step in the extraction process that many processors don't perform. It helps to increase the CBG purity and efficiency while reducing risks in the downstream processing.

Pre-distillation under the decarboxylation process requires to heat raw CBGA molecules to release the carboxyl molecule group as CO2 and convert them to the more readily bioavailable CBG.

The next step - distillation further removes undesirables from the crude oil material, leaving us with a high purity CBG extract that is clean and standardized. CBG oil is different from CBD, so you need to use slightly different parameters to achieve the best results during the distillation process. Following a good strategy should yield excellent CBG oil.

Suppose further refinement is required to produce crystalline cannabinoids in their purest form (CBG Isolate). In that case, we have several options to choose from, including crystallization in a glass reactor or flash chromatography. But, again, always ask your lab about their process see how they control the various steps of the ingredients they are making.

With the best quality raw materials, we can help you unlock the full potential of cannabinoid ingredients. Standardized extracts are the basis for consistently high-quality products. Look for quality formulations and a lab that has experience formulating with a broad range of cannabinoids as well as natural terpenes.

Not many people have heard of CBG, and even less know its benefits. We think it will overtake the more mainstream CBD as the prominent cannabinoid on the market in the next few years. Its rising product popularity makes CBG a cannabinoid worth exploring and adding to your end-product portfolio. There is a lot of product potential to combine cannabinoids with natural terpenes.   If you want to know more about "What is CBG"? and have questions about how to formulate this remarkable cannabinoid, then reach out on our contact form and ask to speak to our lab scientists. We would love to hear from you.

SOURCES and FURTHER INFORMATION ABOUT CBG

A few good blog posts on the subject:

Some excellent papers we have read over the years: