What are Cannabis Terpenes & How Can They Enhance Cannabinoid Formulations?

Wondering how to enhance your cannabinoid formulations? Creating a product that is terpene infused with the right cannabis terpenes makes the difference 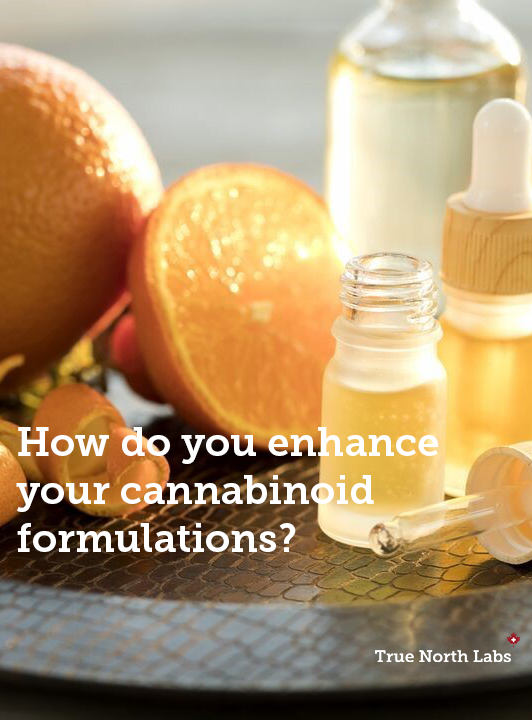 Amidst the pharmaceutical boom of the 20th century, that has shaped our world and our lives in more ways that we perhaps realise, we have lost our connection with nature. Before synthetic medicines took over as the go-to for prescriptions, we knew that many potent remedies could be found in the flora and fauna that still surrounds us today. As you’ll have learned from our previous articles, terpenes – the aromatic compounds that are responsible for the scent of flowers, leaves, spices, trees and roots – are one of nature’s greatest gifts. Recently, a resurgence in the appreciation for these amazing molecules has resulted in a wide range of studies which confirm what we as humans already knew – their potential is astonishing.

Why use cannabis terpenes in cannabinoid formulations?

Following on from our previous articles , introducing you to terpenes in general, and their unique therapeutic properties, we are excited to present the article in our series about formulations.

As we travel deeper into the wonders of cannabis terpenes, we get to know those that often appear in lesser amounts, yet still have an awful lot to give! We’ll also cover a couple of big players that are widely utilised across a variety of industries, including in terpene infused cannabinoid formulations, for a dizzying array of valuable qualities.

This sweet, tropical little number is not only a cannabis terpene, but a pheromone that plays a key role in the social regulation of honeybee colonies! Perhaps one of the reasons why bees love cannabis plants so much. It occurs naturally in kumquat, mango, mint, neroli, pepper, petitgrain, bergamot oil and of course cannabis, among many other plants.

Ocimene is a major component in cannabis varieties developed by whole plant medical cannabis producer, Bedrocan, the oils derived from which have been proven to be remarkably effective in the treatment of drug resistant epilepsy. But it’s unique interaction with other terpenes and cannabinoids to create this result requires more study to be fully understood.

It’s also incredibly anti-bacterial. According to one study, ocimene was ‘the most critical component responsible for the inhibitory activity’ against Staphylococcus aureus. And it’s anti-viral, perhaps even holding promise for keeping the SARS-CoV virus at bay, particularly when paired with Pinene.

As with most cannabis terpenes, the potential of Ocimene is far reaching, with research supporting decongestant, anti-fungal, and anti-inflammatory properties as well making this a great choice for a winter wellness terpene infused oil.

Beta-caryophyllene has recently received attention for its ability to ‘target the trinity of Infection, Immunity, and Inflammation’ in COVID-19, thanks to its potent anti-inflammatory, antiviral, and immunomodulatory properties. These occur as a result of something that makes this cannabis terpene quite unique – a direct activation of the endocannabinoid system. Specifically, the CB2 receptors, which can be found in plentiful supply throughout the immune system, the respiratory tract, the skin, the gut, bones, eyes and many organs. This is usually something more commonly associated with cannabinoids and as such, spicy scented B-Caryophyllene has been dubbed a ‘dietary cannabinoid’, which can be found in black pepper, cloves, copaiba and of course, cannabis.

As mentioned in our last article about cannabis terpenes, B-Caryophyllene mixes well with its sibling A-Caryophyllene (or Humulene), enhancing the beneficial effects of both when used together in a terpene infused cannabinoid formulation.

Terpinolene is not featured heavily in many cannabis strains, but when it is present it packs a punch! It has such a unique floral, herby, citrus smell that many describe as ‘fresh’ and can easily shape the scent of a cannabis bud – making it easier to spot by its die-hard fans! You’ll also find it in lilacs, apples and tea tree.

As well as boasting potent anti-bacterial, anti-fungal and bug repellent properties, recent research also suggests that this could be a major player in reducing the risk of heart disease, inhibiting the growth of cancer cells and act as an antiproliferative agent for brain tumor cells. Amazing, huh?

Aside from all of this amazing medical potential, you may be wondering what immediate effects cannabis strains rich in Terpinolene have on the user. The truth is, we’re unsure. It was thought that it had sedative effects, but that could be more to do with the fact that most strains high in terpinolene also tend to be high in THC. Some reports say, on it’s own, Terpinolene is actually stimulating. Until more research is done, the jury is out!

Linalool is abundant across nature and changes in scent depending on how much of it is present. In high amounts, such as in lavender, sweet basil, purple basil, bergamot and eucalyptus, in has a fresh, floral scent. In lower amounts, it has a subtle, sweet tone.

Unlike other terpenes, which can be a skin irritant at higher levels, Linalool has been described as ‘non toxic’ and ‘non-irritating or sensitising to human skin’, making it a lovely natural fragrance to include in terpene infused cannabinoid formulations for sensitive skin.

One particular point of interest is Linalool’s ability to accelerate wound healing (by adding to the collagen matrix), which is also associated with decreased inflammation and a decrease in scar formation. It’s also absorbed by the skin equally well in essential oil, emulsion formulations and hydrogels, meaning it can be applied topically for local application internally as well as externally. However, oral dosing and inhalation of Linalool, in a vape for example, leads to the highest plasma levels overall.

Interestingly, Linalool binds to serotonin receptors, which is likely to be part of the reason why this terpene is well known for its uplifting effects. This can be extremely useful for those suffering from anxiety or depression, and menopausal symptoms and PMS, when serotonin levels often become depleted.

Further evidence has revealed that linalool exerts neuroprotective, anti-inflammatory, anti-depressant and antioxidant effects in the brain and may even help to reduce cognitive impairment in Alzheimer's disease.

Terpenes can be used in a variety of formats such as edibles, beverages, infused flowers, therapeutic products, and medical cannabis.  There are water-soluble options as well.

Promote the idea of Terpenes with a purpose for your product!!

Look out for the next article in our series soon

If you want to explore the potential of terpenes

If you want to explore the power of terpenes

Please get in touch with the lab.